This is a single blog caption

13 restaurants and bars that are a lot more exciting than a 25-minute ferry ride.

Seattle is a terrific city to live in. But sometimes you get a little stir-crazy, want to go somewhere different, and Renton isn’t going to cut it unless an afternoon testing mattresses at IKEA is your ideal escape. We have a better idea – hop the ferry to Bainbridge Island. Whether you’re spending your time here wine tasting, boutique shopping, or pretending to admire nature, these are the 13 best spots on the island no matter the situation.

Your fancy dinner options on Bainbridge Island aren’t exactly endless, but there’s always Hitchcock. It’s a simple, dimly lit American restaurant that works well for important moments, like when you need to break it to your parents that you quit your office job and moved to Mount Vernon to open your own kombucha brewery. Order some cured salmon, beets, and pasta – there’s nothing like carbonara by candlelight to soften an emotional blow. On a related note, the cocktails are great too. 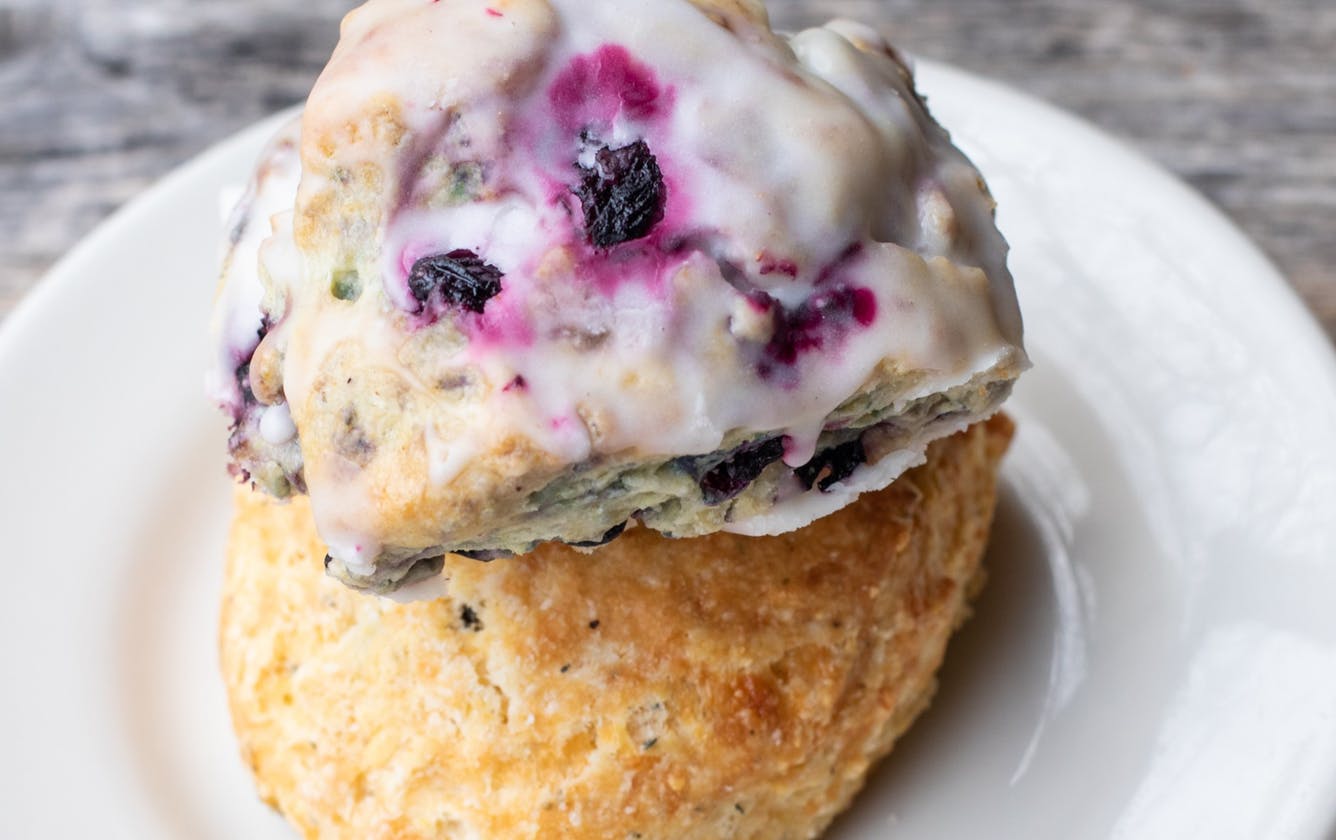 There are quite a few boutique bakeshops on the island, but the only one you need to know about is Blackbird. This is where to go for a solid breakfast or snack to go with a latte. Even if the person in front of you into a rage by claiming the last two slices of almond butter layer cake there are many other delicious things to be had here – mainly, Helen’s French Roll, which is the minimalist-chic cousin to coffee cake. 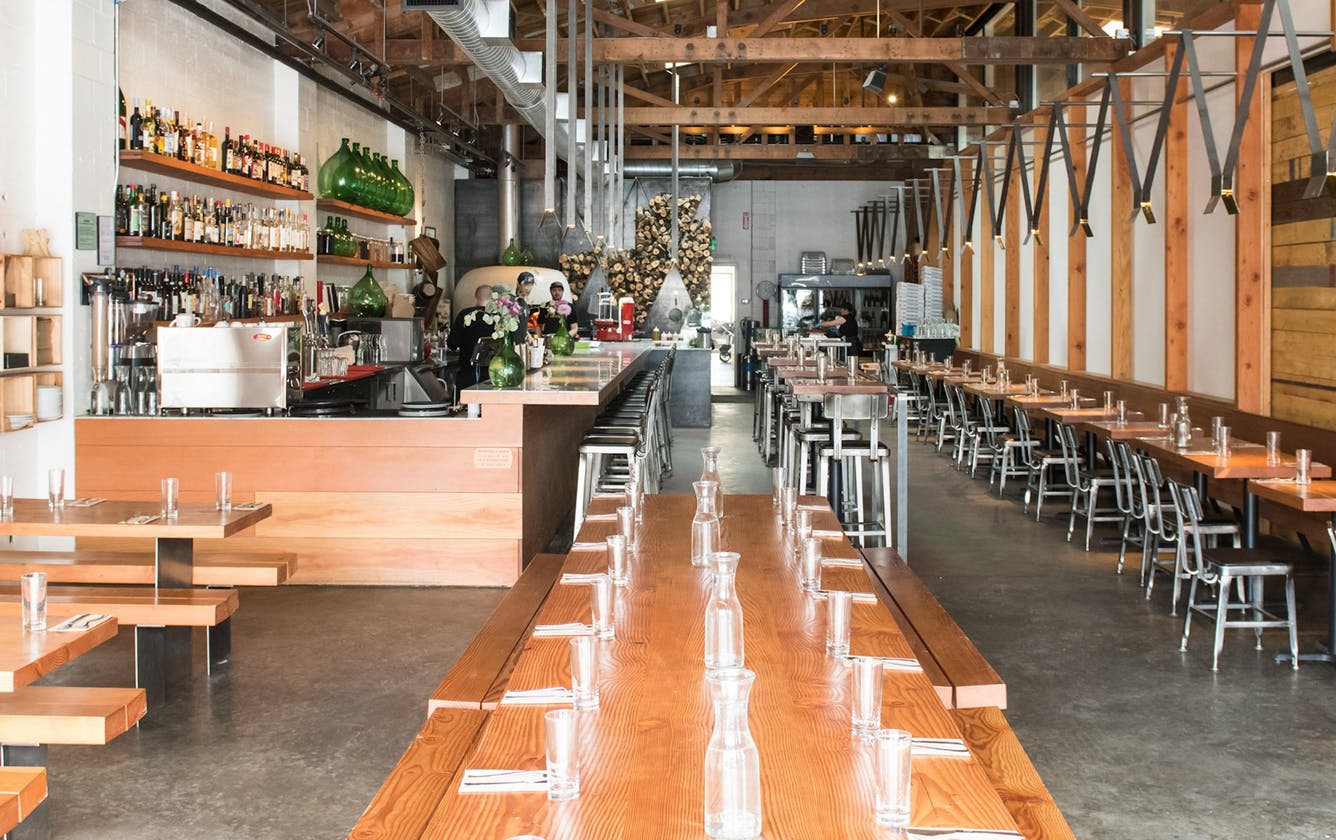 On busy weekends, you can always count on Bruciato to make Winslow Way smell like perfectly charred pizza crust. This pizzeria is from the same team behind Hitchcock, so you can expect a nicely-designed space that’s conducive to relaxing with Aperol spritzes and eating an abundance of buffalo mozzarella. Try it after an exhausting day of artisanal salt shopping on the main strip. 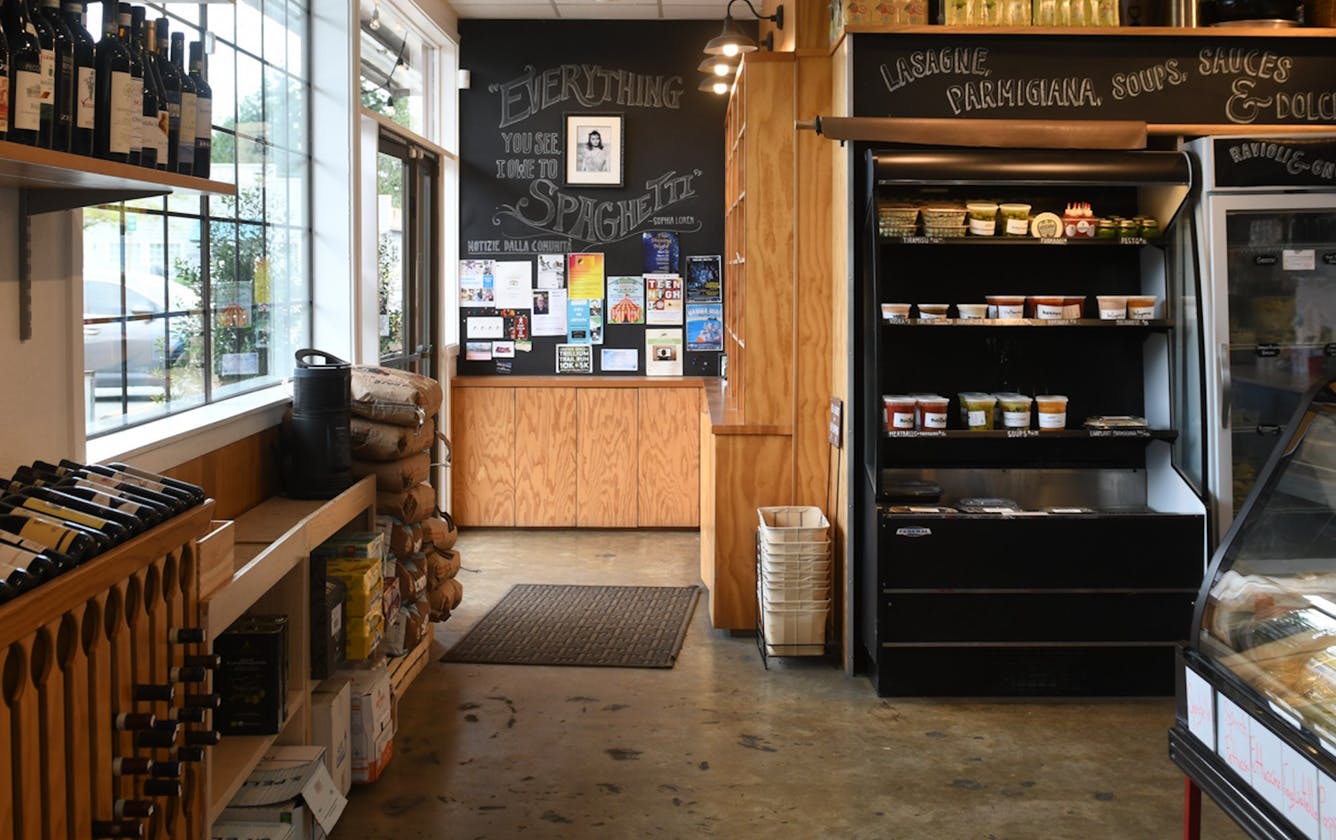 For the best Italian food on the island, drive 10 minutes north of Winslow to a little neighborhood called Rolling Bay. Via Rosa 11 is where to go to feel taken care of, and by that we mean it’s a comforting place to be fed pasta and pizza by people who pronounce “marinara” with D’s instead of R’s. Order at the counter, and then eat this excellent food inside or outside at a picnic table. While you can mix and match any pasta shape with any sauce, the best combination is fusilli with vodka sauce, and if they have the special burrata pizza with speck, you’ll want that, too.

We wish we could say we’ve never met a pastrami sandwich we didn’t like, but this is Seattle, and we don’t want to lie to you. Lackluster PNW deli scene aside, the pastrami and swiss sandwich at Hitchcock Deli is worthy of introducing to your East Coast friends. Everything here is notably good and a lot of that has to do with the fact that all of the meats are smoked, cured, and roasted in-house. You could eat a sandwich on a nice plate with a cocktail in the bar area, but on a nice afternoon, a picnic with one of these and a salted cacao nib cookie is probably best practice. 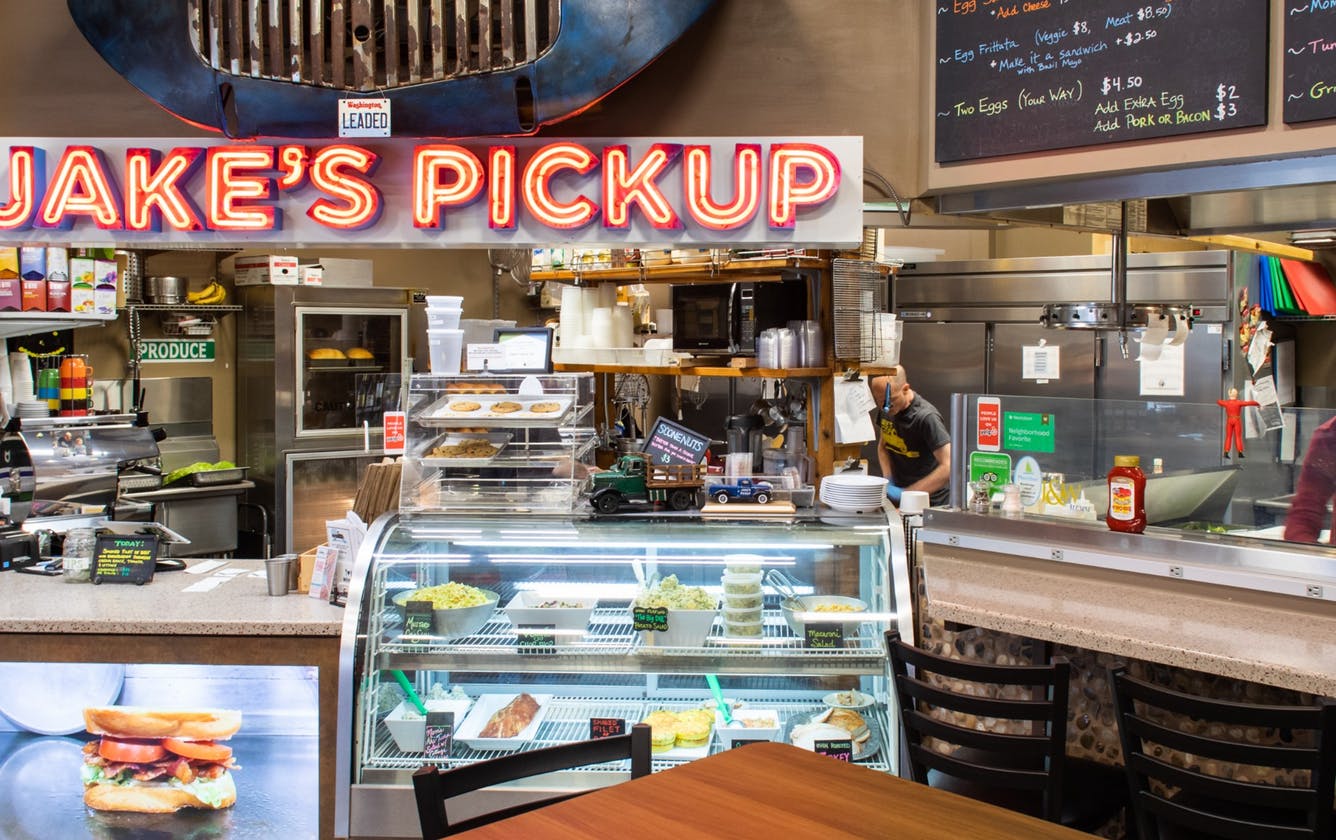 Jake’s Pickup is a lunch spot hidden behind racks of Doritos and gummy bears at a Chevron station where you’ll find some of the best sandwiches in Washington state. Everything here, from the sub bread to the roasted turkey is made in house, and their fried cod sandwich deserves its own radio jingle. And if you think that pulled pork and bbq sauce don’t belong with egg and cheese on a breakfast sandwich, Jake’s will prove you wrong. Don’t forget some chocolate chip sconuts (a scone donut hybrid) for the road. 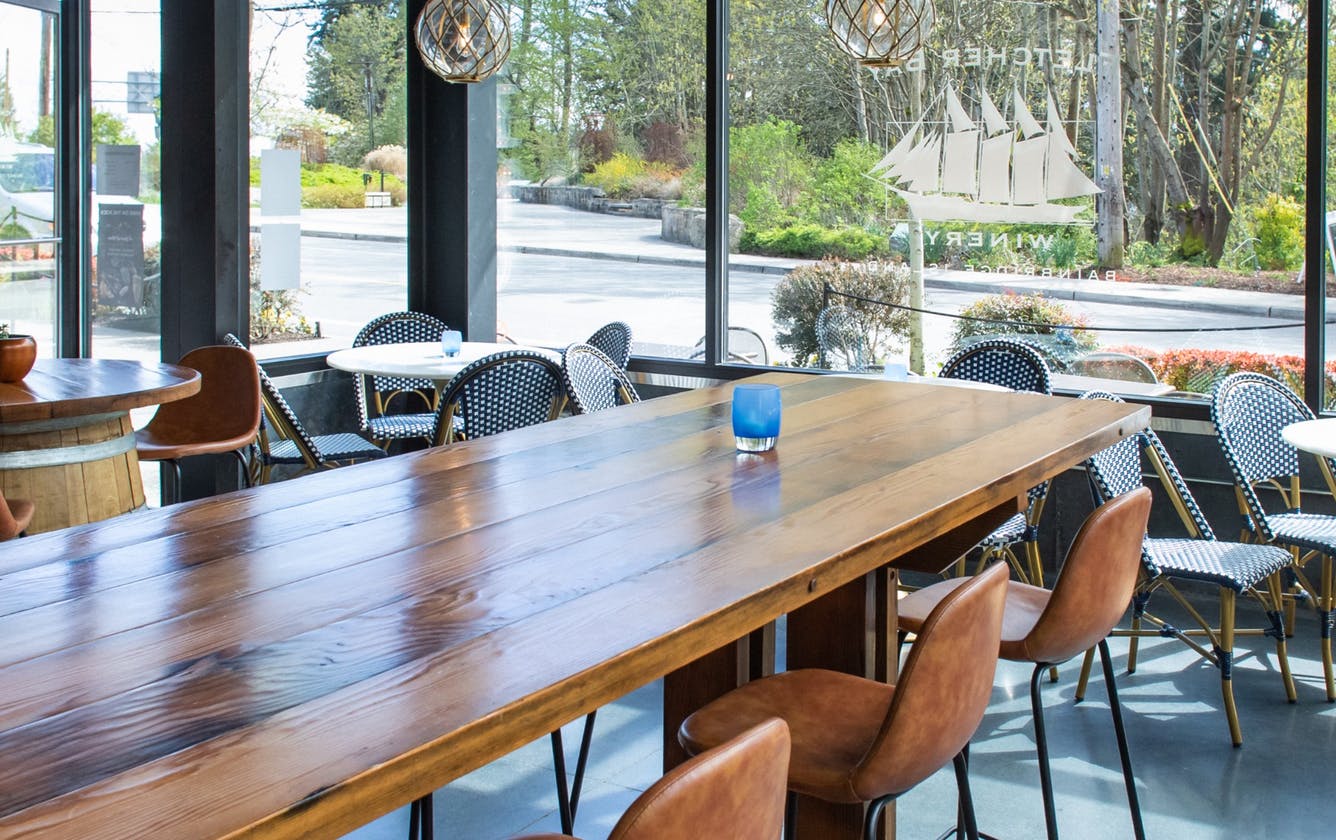 Congratulations – you screwed up and thought the Seattle to Bainbridge ferry schedule was the Bainbridge to Seattle schedule, and the next boat back to the mainland isn’t for another hour. This is a perfect excuse to drink some wine, so walk back up to Winslow and have a flight at Fletcher Bay. The grapes are grown on the island, and there’s something for everyone, from the minerally Albariño to some strawberry wine that doesn’t taste like Crystal Light. The whole interior looks like a beach summer home, so naturally you might bump into a bachelorette party or three. 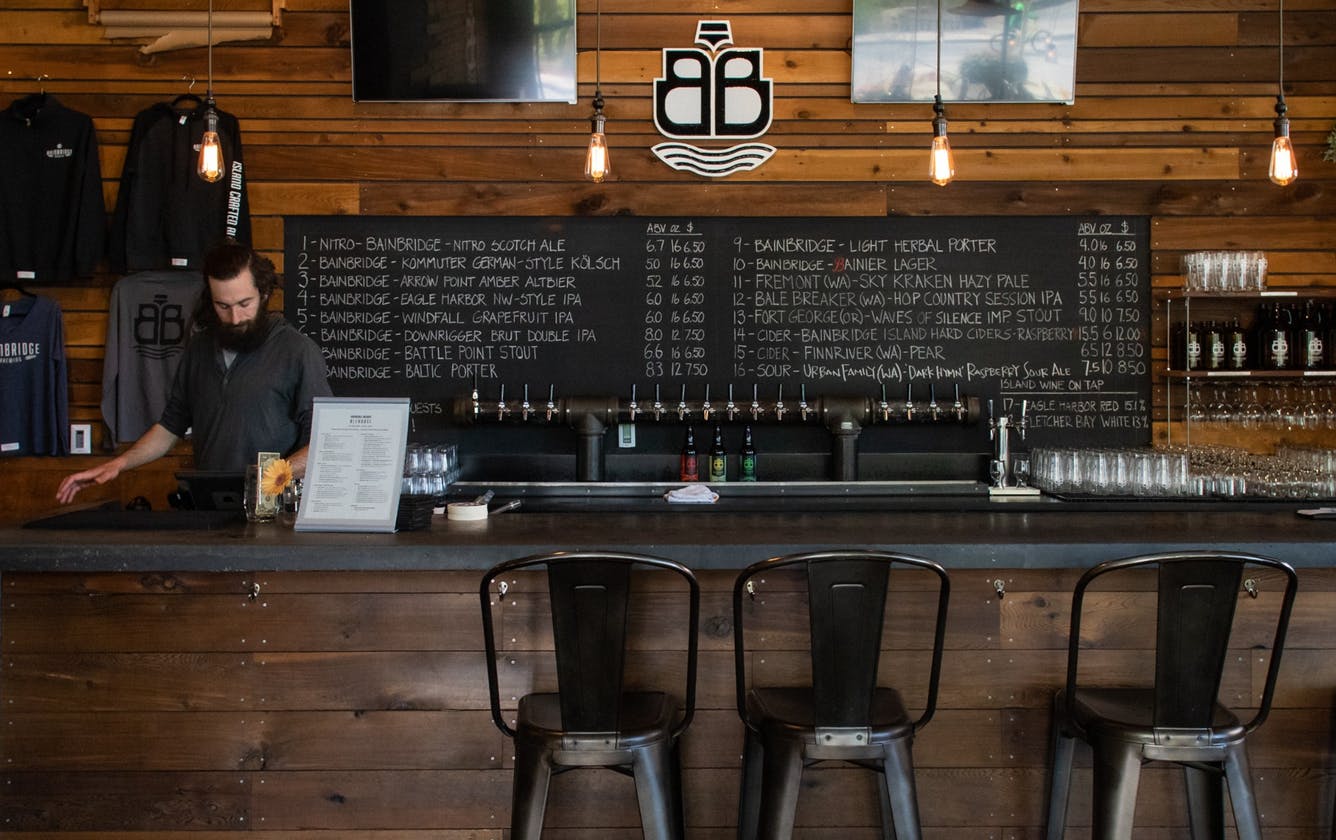 If you missed your ferry but aren’t a wine fan, have some beer at Bainbridge Brewing. They serve a few different types of housemade beers as well as guest taps from Seattle places like Urban Family. We like the grapefruit IPA, especially while sitting on a couch and playing board games. If you are, in fact, good at reading boat schedules and just want some beer, this is perfect for that, too. 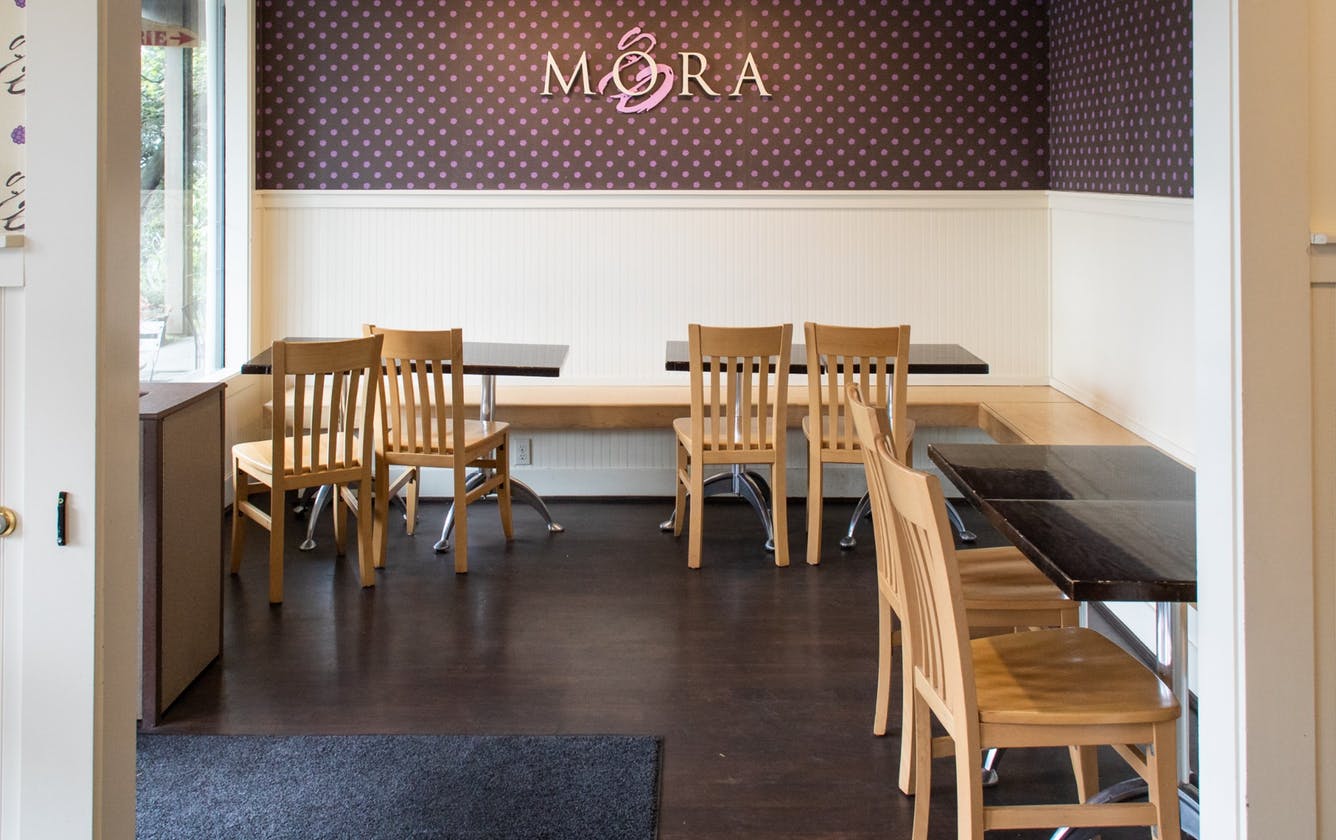 Mora is the only scoop shop on Bainbridge Island. So it’s convenient that the ice cream is excellent, even though the near-constant line out the door is a big time-suck on a hot day. The many flavors here range from cheesecake brownie to blackberry. 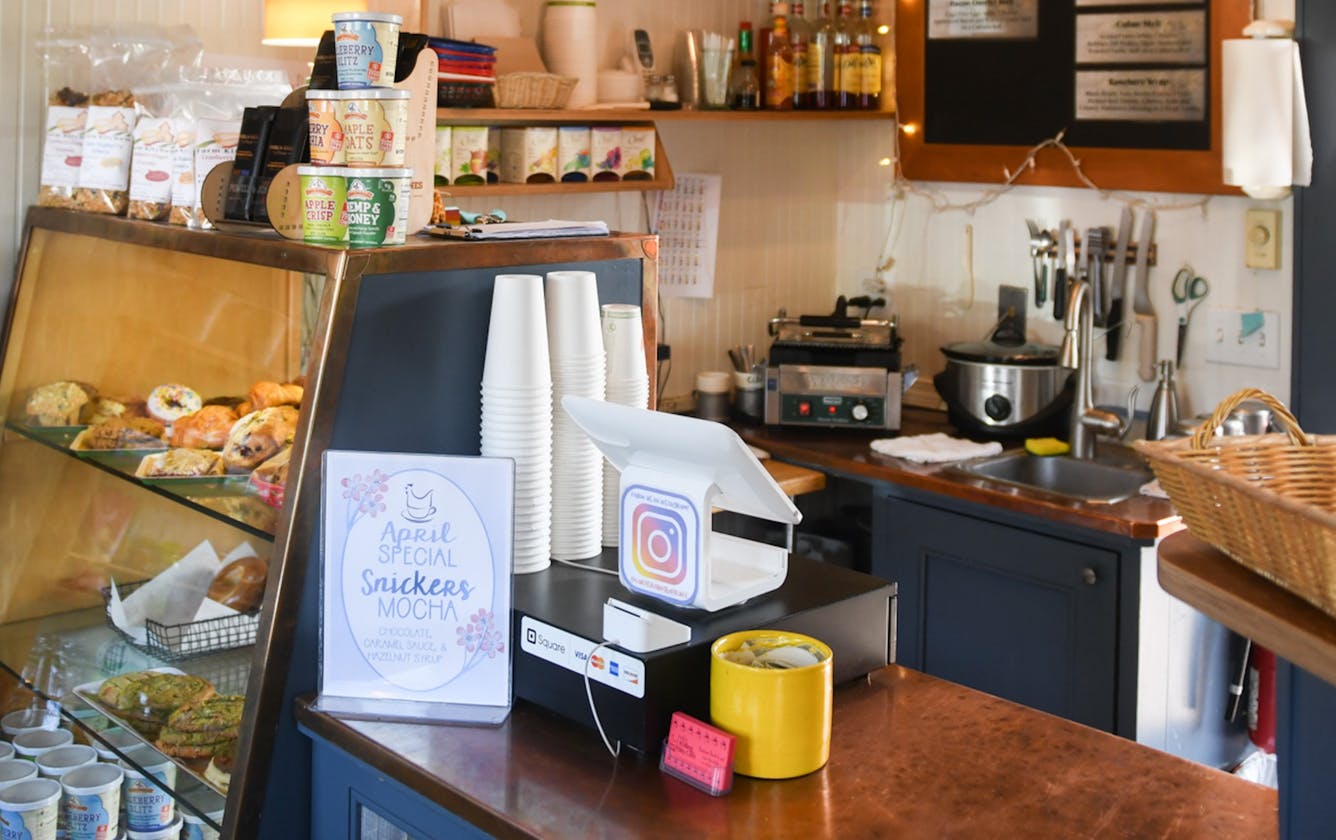 Right across the street from Via Rosa 11 is a little coffee shop that doubles as a flower garden and serves excellent espresso drinks in any flavor combination you could ever want. Just make sure you drink it on the patio if it’s warm out. 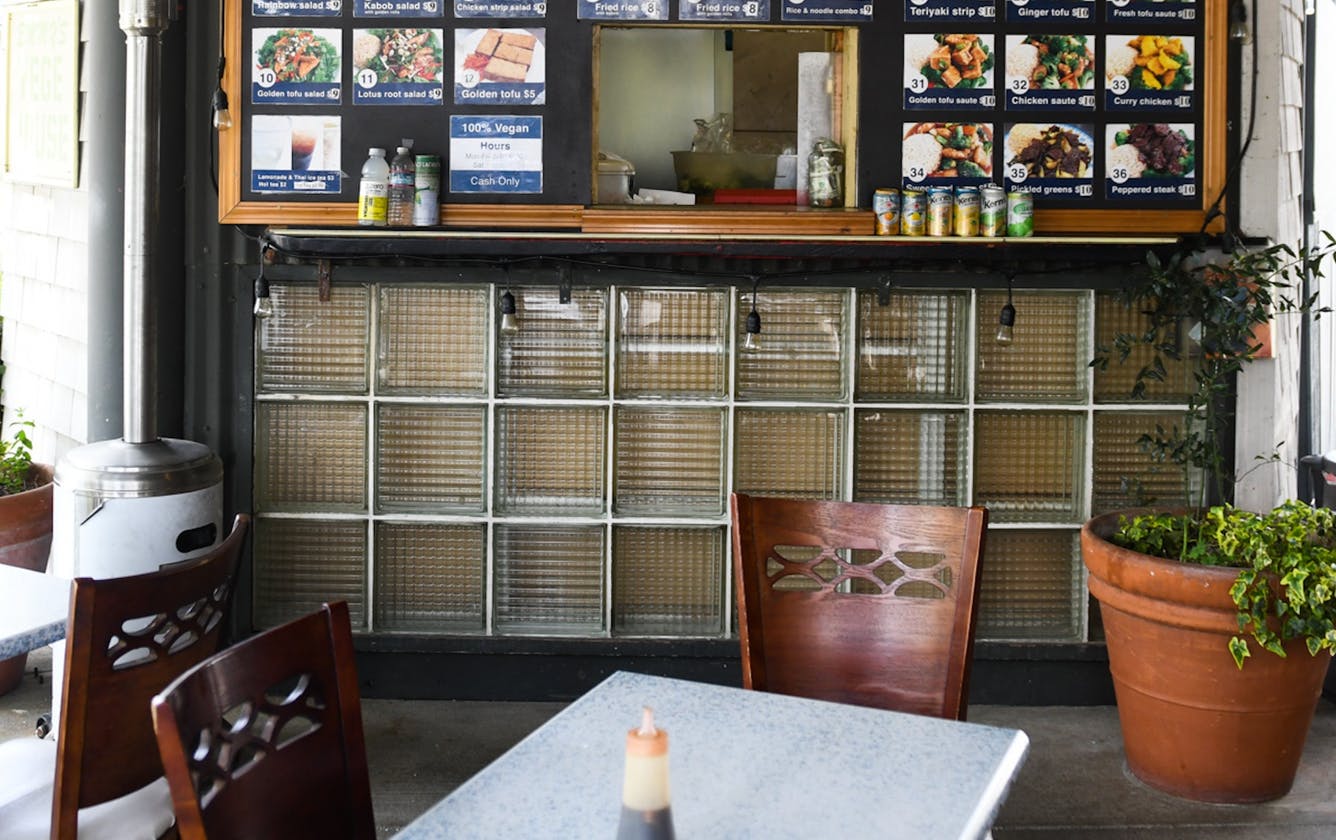 Emmy’s Vedge House is a solid Vietnamese takeout operation. Their menu happens to be vegan and has noodles, rice, and stir fry. Some things are better than others here, but we’re fans of anything with tofu and crispy golden rolls. It’s perfect for when you’re craving something salty but are also feeling salty about the long wait time at Bruciato.

If a spontaneous weekday off brings you to Bainbridge and you want to take a leisurely patio lunch, Restaurant Marche is a good way to go. It’s a classic French spot with good champagne, croque monsieurs, and fries with aioli. Service is on the slower side, but as long as you’re all for soaking in the island air while sipping Cuvee, you’ll have a good time. 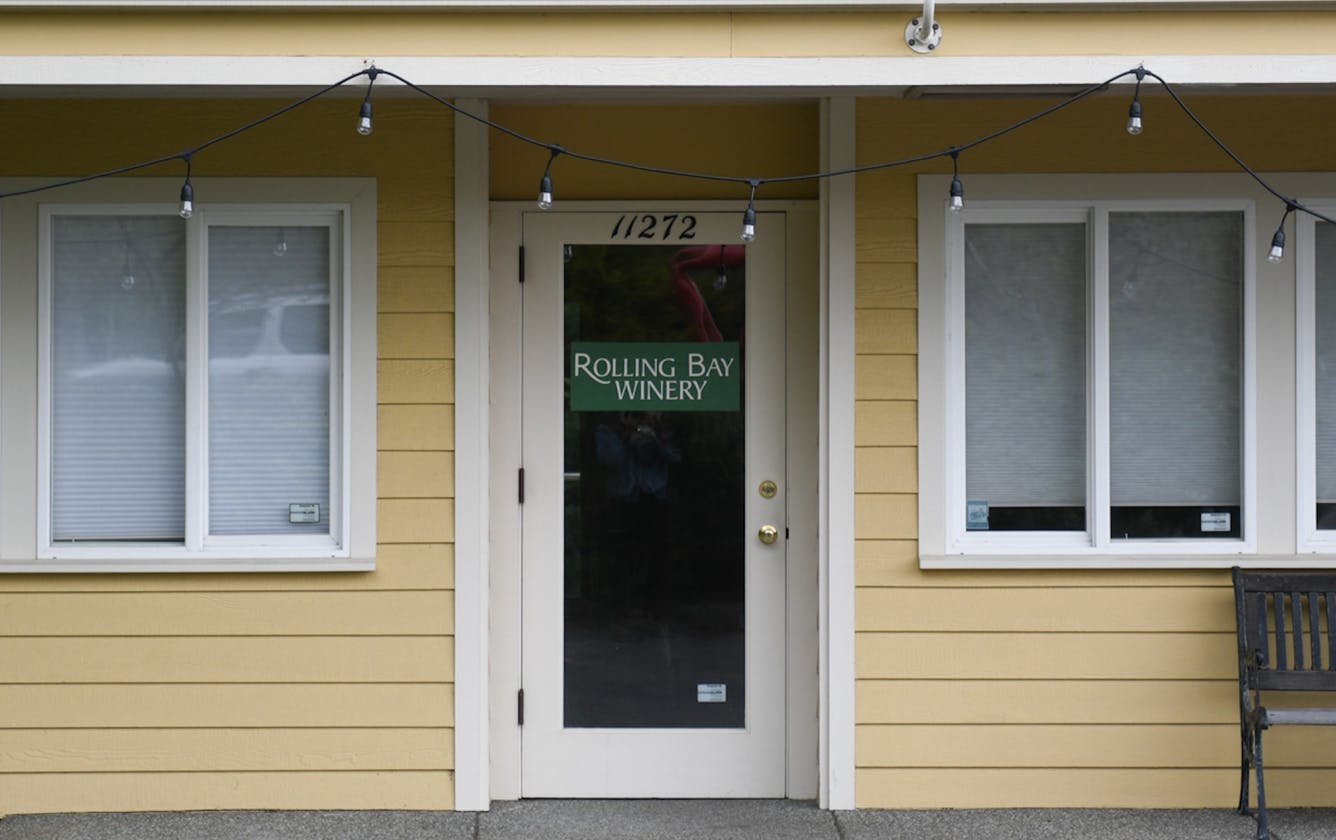 Upon entering Rolling Bay Winery, you’ll be greeted by Alphonse, the friendly owner who will shake your hand and encourage you to drink wine immediately. He’s our kind of guy. Enjoy the wines here in a lawn chair on their grassy patio before bringing a bottle home. But not before, snacking on the free cheeses and meats available inside. The 8-year-old we saw running with flatbread crackers screaming “I can’t stop eating these” is all of us. Avoid the crowds on Winslow and do a tasting here.

Escape to scenic Bainbridge Island and stay at The Marshall Suites, the #1 hotel on the island. Located near downtown Winslow, this newly renovated boutique hotel is your home while enjoying the island’s wineries, restaurants, attractions and outdoor activities.